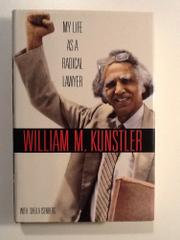 MY LIFE AS A RADICAL LAWYER

In this bafflingly disappointing autobiography, Kunstler, radical lawyer extraordinaire, is once again arguing a difficult case—this time his own. As defense attorney in some of this country's highest profile political courtroom dramas, throughout his astounding career (he's now 75) Kunstler has chosen to champion political causes rather than people—causes that were often very unpopular (he's currently representing Colin Ferguson, charged with murder on the Long Island Railroad). His rallying cry is the defense of the underdog, those he feels are most rejected by society and who therefore risk missing out on that all-American right: a good defense. But his hard-hitting remarks here (written with Isenberg, Women Who Love Men Who Kill, 1991) about the corruption and racism of the American judiciary get drowned in dry, criminally uniformative narrative that belies the passion it is intended to convey. Instead of offering us a unique view of cases involving Abbie Hoffman and the Yippies, Martin Luther King, and others, we get empty apologies for a childhood appreciation of ``Amos 'n' Andy'' and compulsive philandering during his many travels. He intriguingly calls the Kennedys ``dangerous,'' but presents no further explanation, and his criticism of another leftie lawyer, former NAACP director Jack Greenberg (Crusaders in the Courts, p. 363) smacks of petty in- fighting. Kunstler's career has followed the political times: Earlier in his career he considered any situation in which a black man shot a white cop to be a political case; today he finds himself rushing to defend Arabs (i.e., the World Trade Center bombing case). Though he gives an interesting if idiosyncratic introduction to legal politics, Kunstler seems primarily obsessed with his outsider status; he needs to prove that he is hip and sexy despite his briefcase. One would have hoped for more from a man who has stood up for justice in courtrooms often determined to undermine it.