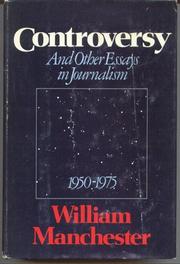 The lead article in this collection recounts—for those who still care—Manchester's side of the dispute over the Kennedy book, Death of a President. (Jackie had told him, "Anybody who is against me now will look like a rat unless I run off with Eddie Fisher.") The other pieces are essays in popular history. Valentines to the Marines, to the Pacific forces in WW II, and—in a long profile—to Walter Reuther are accompanied by a second category: the gentle debunking that amounts to an encomium. Here the beneficiaries are John D. Rockefeller I, Adlai Stevenson, and the New York Times. The strongest pieces—which recall Manchester's excellent Arms of Krupp (1968)—describe the Bank Holiday of 1933 and a resourceful slumlord. While the banks themselves get off the hook, we have a lively sense of financial mechanisms and historic periods. There is also an appreciation of H. L. Mencken, whom Manchester knew well. It becomes clear, indeed, why Manchester is so fond of a man who truly dared to mock the great, while sharing a fierce hatred of "the dull and delinquent"—a sentiment Manchester vents in a singular essay which turns from sound ridicule of inverted snobbery into a crotchety howl against "egalitarian. ism." The rest of the book, however, is good fun if not lasting journalism.