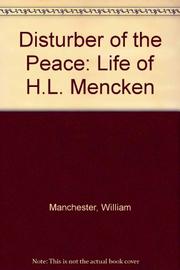 DISTURBER OF THE PEACE

The life, and lifelong battles with the dragons of complacency and cave level thinking, as they were conducted by the wise, witty and caustic sage of Baltimore who as a newspaperman, magazine editor and philologist became one of the most important forces in the last half century of American literature. Here are the early restive days in the family cigar business; the break into newspaper work which Mencken recorded in his trilogy. Later, with the American literary renaissance, the wild days of editorship on The Smart Set with George Jean Nathan when hilarity often hid H.L.'s real contributions to the breaking down of Pollyanna-ism in American letters, and his early drumbeating for Dreiser, Cabell, Shaw, Conrad and Ibsen. The '20's brought the original American Mercury, Mencken's test case with Boston's Watch and Warders, and his brilliant reportage of the Scopes Trial in Tennessee. The depression saw Mencken's temporary eclipse when he found himself out of touch and sympathy with a whole new generation, to be followed by his resurgence into favor with his trilogy and his monumental The American Language, etc. Written by a staff writer of the Baltimore Sun, this biography is never dull or blindly laudatory, records an exceptional figure in exceptionally readable terms. A must for Menckenites.