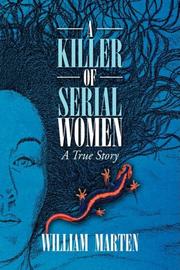 A KILLER OF SERIAL WOMEN

One man’s frank appraisal of his life as a sadomasochist.

Before he’s ten paragraphs into his memoir of lust, pain and sexual perversion, Marten invokes the Marquis de Sade, whose epic ramblings on those same subjects made him the scandal of his time and an enduring object of fascination to this day. The invocation is a daring gambit (de Sade had considerable literary talent) and Marten’s narrative does share two qualities with his prototype—it’s utterly unflinching and it’s incredibly lively. Marten outlines the development of his sexual fascinations—he’s aroused by pain and likes to hurt his sex partners—from childhood, when encyclopedia illustrations prompted his first sadomasochistic imaginings; through fraternity life at college, where self-bondage was as close as he could get to the real thing; into the dating scene, with often hilarious results; and, in the book’s strongest, most heartfelt passages, through the early joys and eventual breakdown of his marriage. Marten’s wife, Rachel, is initially an enthusiastic participant in his fantasies, but once their novelty wears off for her, a void opens in their relationship. Marten chronicles it with an absorbing lack of self-pity: “I had once seen Rachel as a doorway to possibility, but now she’d become my jailer” (he consistently refers to women who disappoint him—including his mother—as his “jailers”). Marten’s unspoken insistence that, bedroom preferences notwithstanding, he is a likable and even decent guy runs throughout the book, putting a refreshingly human face on sexual behaviors most people dismiss as sordid and criminal. Unlike the infamous Marquis, all of Marten’s partners were consensual.

A thought-provoking volume, all the more memorable for being unapologetic.