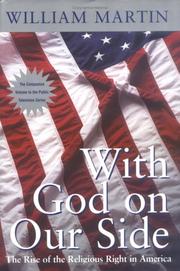 WITH GOD ON OUR SIDE

The Rise of the Religious Right in America

Published to coincide with a PBS series of the same title, this is a richly detailed, objective account of Christian fundamentalism in the last 50 years and its increasingly organized efforts at shaping public policy. With extensive interviews and research, sociologist Martin (Rice Univ.; A Prophet With Honor: The Billy Graham Story, not reviewed) sets out to track the transformation of Christian conservatives from quiet, God-fearing Americans into one of the most potent political forces of the 1990s. He starts by revisiting the career of Billy Graham, then traces the ideas and careers of Graham's successors, including Jerry Falwell, Pat Robertson, and Ralph Reed, and the major fights over public policy that their movements have been involved in. Weaving together revealing details and first-person accounts, Martin recreates a number of important conflicts, including the sex education battles in Anaheim, Calif.; the Kanawha County, W.Va., textbook wars; the debate over how to treat AIDS patients; and the fight concerning Amendment 2, Colorado's overturned anti-homosexual law. Martin provides thorough reports but rarely offers pointed morals. He does, however, skewer hypocrisy where he finds it, as in his tracing of the racism evident in Jerry Falwell's early career and his subsequent disingenuousness about it. He also strays repeatedly into political history, such as chronicling presidential races. But the digressions are so well rendered that the reader shouldn't mind. Overall, Martin leaves one with heightened concern for the future of religious tolerance in America. He warns that ``the level of religious conflict appears to be rising and the historically unprecedented extent of religious freedom may be in some danger.'' Both reformers and religious conservatives should find in this penetrating narrative some incentive to work to maintain ``the pluralism that has served us so well.'' (24 pages pohotos, not seen) (Author tour)