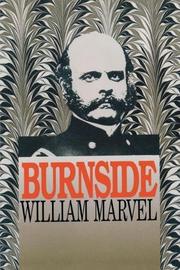 A workmanlike biography of the amiable Union general that unconvincingly argues that Burnside's poor military reputation was largely an undeserved product of vicious military gossip and his own naive humility. Marvel, author of two scholarly Civil War military histories, points out that Burnside, exercising independent command over small numbers of soldiers, enjoyed some important successes—for instance, his spectacular 1862 victory on the North Carolina shore, which cut off Confederate trade routes, and his 1863 defense of Knoxville, which contributed to the destruction of Bragg's army at Chattanooga. Marvel also persuasively argues that McClellan in the Antietam campaign, and Halleck during the battles of Fredericksburg and Chickamauga, unfairly castigated Burnside for lethargy, confused him by making deliberately unclear orders, and unjustly used him as a scapegoat for Union defeats. Burnside's mistakes were probably no worse than those of other Union generals—his costly frontal assaults at Fredericksburg, for example, were reminiscent of Grant's unsuccessful charges at Vicksburg and Cold Harbor. Nonetheless, Marvel cannot absolve Burnside of responsibility for the Fredericksburg disaster or for the sanguinary 1864 debacle at the Crater. Moreover, Burnside showed considerable hamhandedness in his actions as chief of the Department of Ohio (for instance, his arrest of the notorious Copperhead Clement Vallandigham for making an anti-Government speech presented the Lincoln Administration with a potentially embarrassing dilemma that Lincoln cleverly averted by sending Vallandigham across Confederate lines into the South). Marvel succeeds in portraying Burnside as an honest, patriotic, and likable man who conscientiously did his best. He does not, however, succeed in altering history's judgment of Burnside as a modest man with much to be modest about. A well-researched and thorough look at one of the Civil War's major figures. (Twenty-nine illustrations; 13 maps.)