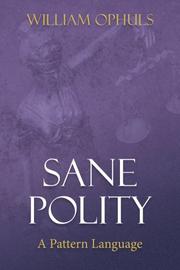 This fourth book by independent scholar and former member of the U.S. Foreign Service Ophuls expresses the author’s ideal vision of contemporary politics.

Political scientist Ophuls attempts to outline a rational view of nation-state politics based on the writings of thinkers such as philosopher Edmund Burke, economist John Maynard Keynes and President Thomas Jefferson. “By orienting civilization toward nonmaterial ends—toward making souls instead of consumers—we can become fully human within the bonds set by nature,” Ophuls writes. The author lays out, in 35 very brief essays, how a pattern language of polity—that is, good design criteria for a nation-state—might look with great specificity, although he doesn’t go into great detail about why they meet his standards; he also doesn’t fully develop a nature metaphor he introduces early on. That said, the author’s ideas, written in thoughtful and sometimes trenchant prose, often prove surprising: “[H]ypocrisy is the vice,” Ophuls writes, “that, in paying tribute to virtue, actually supports morality.” His support of limited government and individual liberties may seem to indicate libertarian leanings, but such a judgment might be shortsighted, given this scholarly book’s complex textures; he cautions that liberty is not license and argues for small but powerful government that can operate in limited but effective ways. Not content to stick with democratic institutions, Ophuls recommends that a nation-state should be run by a wise council of elders, who can rely on “mandarins” to carry out its dictates. People, the author argues, are a mixture of devil and angel; the only way to overcome human nature is through prudence and by taking a long view of state affairs. As he makes his arguments, Ophuls is at home quoting ecologist Wendell Berry and psychologist Carl Jung; the breadth of his sources, as well as his political schema, makes for an engaging, deep reading experience.

A well-written theoretical look at the difficulties of postmodern government.