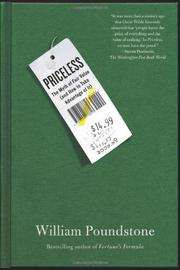 Bright analysis of the psychology of pricing.

Poundstone (Gaming the Vote, 2008, etc.) immersed himself in the young field of behavioral decision theory to write this engaging book about the many irrational factors that influence the prices of things. Founded by University of Michigan psychologist Ward Edwards in the early 1960s, the field has produced insights that are now widely used by price consultants who help corporations “extract the maximum willingness to pay from each consumer.” Prices are simply made-up numbers, writes the author, and most people are clueless about them. Experiments by psychologists at the Oregon Research Institute and elsewhere reveal the many ways to sway people who are estimating monetary values. For example, setting an absurdly high initial, or “anchor,” price on an item (or demanding an exorbitant cash settlement from a jury) will generally lead people to pay more than they might have. In retail stores, obscenely high-priced items (such as a $7,000 handbag) make everything else (such as similar $2,000 handbags) look affordable. Similarly, in another exploitation of the “contrast effect” in prices, more $800 shoes will be sold when $1,200 shoes are displayed next to them. After describing the field’s major researchers and their work, Poundstone devotes most of the book to explaining how behavioral decision-making plays out in the real world, where price numbers are influenced by many irrelevant factors. He explains how supermarkets are able to charge premium prices for “organic” and “green” products; how restaurant menus are designed to draw attention to profitable dishes; how rebates cast a magic spell on consumers, many of whom never submit claims or cash the checks that are sent out; and why the sky’s-the-limit prices charged for text messages are “possibly the greatest ongoing con job of American capitalism.” Online shoppers will be dismayed to learn how background images on websites can affect product choices, and Poundstone provides plenty of useful information for negotiators, car and home buyers, investors and others trying to figure out what to pay.