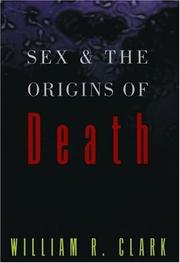 SEX AND THE ORIGINS OF DEATH

Speculations on life and death from a professor of cellular biology at UCLA. ``We die because our cells die,'' Clark says. Death is ``the evolutionary consequence of the way we reproduce ourselves.'' The sole function of cells, human or otherwise, is to replicate their DNA; once finished, they are programmed to die. That is, once a job is done, such as growing fingers out of weblike structures in human embryos, certain cells have no further task and die. ``Programmed'' is a key word here: In a number of clever laboratory experiments, healthy cells reproduce themselves only to a point, and undergo a process of exploding outward, called apoptosis. If the process is blocked, cells have a tendency to become cancerous and, at the least, will stop dividing. Only cancer cells and certain ancient single-celled life forms are, in a manner of speaking, immortal, but they, too, will eventually die by overcrowding or when they run out of food. Clark proceeds to discuss how the nature of cell death relates to the agonizing debate over a patient's ``right to die,'' detailing the strange findings of Karen Ann Quinlan's autopsy and relating it to yet another incidence of near-death: the spores produced by certain animal forms in times when nature makes it hard to reproduce. The minuscule spores of briny shrimp truly seem to be dead but, when chilled to absolute zero and placed in the correct environment, will begin the cycle again. Clark ends by speculating about so-called ``nonsense DNA.'' Is it a useless relic of the evolutionary process, or does it hold the keys to an explanation of why we must die, and even why we are here in the first place? His discussion of biology flows into a discussion of metaphysics. Strikingly well argued and clear.