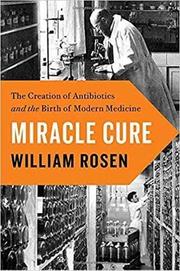 The Creation of Antibiotics and the Birth of Modern Medicine

A richly documented history of the rise—and threatened future—of antibiotics.

Before the invention of antibiotics, doctors practiced “heroic medicine,” rebalancing the body’s humors with bloodletting, blistering, purges, enemas, and other primitive techniques. But in the late 1800s came Louis Pasteur and Robert Koch, and suddenly the world knew that cholera, plague, tuberculosis, diphtheria, and other maladies were caused by invisible microbes: bacteria. So began the hunt for remedies. There were some successes—antitoxin for diphtheria, a vaccine for anthrax—but competition and venomous rivalries prevailed, pitting Pasteur against Koch, France against Germany. Rosen’s (The Third Horseman: Climate Change and the Great Famine of the 14th Century, 2014, etc.) warts-and-all sketches of the key figures serve as refreshing antidotes to the hero-worship texts we read as schoolchildren. The author also deftly contrasts Germany’s synthetic dye industry, which funded research that led to Paul Ehrlich’s Salvarsan for syphilis, with the feeble research support elsewhere. But the real revolution in remedies had to wait until World War II and the rediscovery of penicillin, when British scientists came to America for help in the fermentation process needed to generate copious amounts of the extract. Then came Selman Waksman, who coined the word “antibiotic” and found in a soil sample a bacterial strain that produced its own antibacterial product that worked against TB. The race was on for other useful soil microbes, and numerous drug companies emerged (and merged), from small producers of herbals and botanicals to big-time generators of lucrative broad-spectrum antibiotics. Rosen also charts the course of the FDA and the development of testing and safety protocols. Unfortunately, the current scene is ominous. Antibiotic resistance is serious and continues to grow thanks to low dosages of antibiotics still allowed in animal feeds. Rosen offers some hope regarding new approaches to combat resistance, but they seem meager.

An encyclopedic reference for researchers and practitioners but also accessible for general readers due to Rosen’s lively depiction of the people, places, and politics that color the history of the fight against infectious disease.