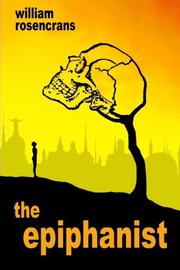 Rosencrans’ cerebral sci-fi debut depicts a young man’s dark, picaresque journey through the complicated strata of a future both engineered and savage.

Vladimir has a flawed template. “[T]here’s a statistical likelihood that you’ll commit a violent crime,” he’s told. An error in his genome marked him from birth as dangerous, condemning him to a life among the criminals, violent religious zealots and meddlesome “nanite” (nanorobotlike) creatures of Abaddon, a vast, feudal jungle territory where fiefs serve the distant, impenetrable Holy City. The territories exist on an unnamed island on a toxic Earth, repopulated by animals, plants and genetically modified humans—water people, snake people, people with pelts, etc.—and sheltered from the poisonous air by an invisible dome. Another “living wall”—a feat of nanobiotechnology—separates the Holy City from the sinners on the other side. There’s an ongoing war in Abaddon, since a branch of the ruling family of Patriarchs was unhappily expelled from the city. Despite being surrounded by thieves, murderers and alcoholics—not to mention experiencing occasional psychotic breaks that manifest as religious visions—Vladimir, in his mid-teens, is nearly a model citizen: a devout follower of the island’s faith (a hybrid derivative of Christianity), a good student and a disciplined sword fighter. He’s been noticed and nominated for “redemption.” An evasive nanite “herald” in the shape of a fly tells Vladimir that he will be taking the ethical examen and evaluated for entrance into the Holy City, a rare achievement. Then the war erupts. The fly, along with a woman whose skin looks like the midnight sky, a goat-headed boy and other heralds offer to guide him through the jungle and prepare him for the test. The heralds can’t be trusted but neither can the hallucinating mystic he meets nor his kensei, sword-master Sister Agnes. Truth feels just out of reach, and Vladimir is being used in some way, but every revelation feels tentative. Rosencrans’ tense, didactic narrative is beset with references to dogma, history and philosophy. The ideas are complex, and the author seems more sentimental about his arguments than his characters. Through Vladimir’s encounters with religion, politics and the immaterial world, Rosencrans addresses nature versus nurture, humanity’s goodness and its ability to evolve—thought-provoking questions, though at times, they’re rehashed too frequently. Nonetheless, Rosencrans’ reflections on how power is asserted and maintained and how Vladimir ultimately navigates these systems of control will keep readers interested.