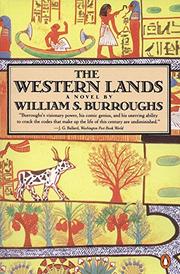 The conclusion of a trilogy incorporating Cities of the Red Night (1981) and The Place of Dead Roads (1984)—and, like its predecessors, a chaotic, sometimes nauseating, fitfully funny melange of gore, sexual perversion, and surreal science fiction. For once, Burroughs begins in a sedate minor key: William S. Hall, an old writer living on welfare who "forty years ago. . .had published a novel which had made a stir," lies on his bed "watching grids of typewritten words in front of his eyes." Presumably, Hall is modeled on Burroughs; one settles in for some poignant autobiography. No such luck. In less time than it takes to say "avant-garde," the narrative decays into gibber-speak: "He unscrewed capitalism, snake shedding its skin. Change terminal. Bought a ticket to offer a chance of outhouse. Hour souls." But the industrious literary sleuth can discern a plot line here, something about a search for the Western Lands beyond the Land of the Dead, where immortality awaits. Kim Carson, Hassan i Sabbah, and other reptilian misfits from earlier Burroughs novels stir the murky soup, which bubbles up chunks of Egyptian mythology, Reichian psychology, drug lore, futuristic vision (the president hunkers in an underground bunker), biological mutation (Burroughs believes that genetic experimentation may be our species' salvation), blasts at book reviewers, and oodles of info about centipede venom. Lots of great quirky ideas here; but the imagery is repellent and the delivery helter-skelter from—some may feel—the Hieronymus Bosch of fiction.