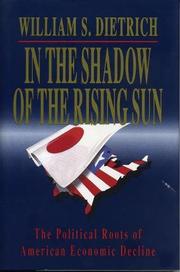 IN THE SHADOW OF THE RISING SUN

As good and thoughtful a case as has been made for a US industrial policy—defined by businessman Dietrich as the state's purposeful allocation of resources to high-tech enterprises with the capacity to add substantive value. In his evenhanded, well-reasoned appraisal of America's inability to compete on equal terms with Japan in a host of basic and emergent fields, Dietrich (helmsman of a steel-processing and building-products firm in Pittsburgh) parts company with most latter-day Jeremiahs. Instead of amassing anecdotal evidence attesting to Japan's widening edge, he accepts the situation as a given and focuses on explaining its origins in cultural terms, comparing America's antistatist traditions as a constitutional democracy to the feudal heritage of an island nation that has an essentially homogeneous population and virtually no ethnic or regional strife. And Japan, Dietrich points out, also has cadres of able civil servants who are above politics and dedicated to advancing the country's interest. The author shows how these professionals (who command the greatest respect) employ a variety of public and private means to the end of making Japan the world's ranking economic power. By contrast, he observes, career bureaucrats in the US have precious little prestige, let alone authority; nor are political appointees able to accomplish much during their typically brief tenures. Unfortunately, Dietrich concludes, America can no longer afford its instinctive commitment to free markets and free trade, much less unfettered individualism. Indeed, he argues, the US should take its economic conflicts with Japan at least as seriously as the erstwhile cold war with the Soviet bloc. If it fails to meet this challenge, the nation risks losing significant measures of autonomy not only to Japan but also to other East Asian and European countries that have embraced the statist approach. Although less than hopeful about any immediate or meaningful change, Dietrich proposes systemic reforms that would commit the US to a coherent as well as comprehensive economic strategy. A no-nonsense audit that puts a consequential dilemma in disturbing perspective.