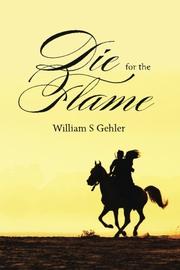 Die for the Flame

A young hero finds himself at the forefront of a series of bloody conflicts surrounding a magical, all-important Flame in this epic fantasy debut novel.

Clarian is a simple ferryman, like his father before him, or so he thinks—until the day that the Flamekeeper sends Rokkman, one of his priests, to find him, based on the prophecy of an oracle. The Sacred Flame is a magical item of great power and the source from which Clarian’s people, the Karran, gain their strength. Many years ago, the godlike Immortal Ones granted the Flame to the first Flamekeeper and it has been passed on from generation to generation. Now, however, Karran is under attack from the Maggans, who were expelled from Karran long ago and seek to capture the Flame for themselves. As the Flamekeeper informs Clarian, he is a Chosen One of prophecy, the only hero who can protect the Flame. To complicate matters, however, Clarian soon finds himself falling in love with Neevan, a Maggan warrior. Although her initial plans involve betraying him, it becomes increasingly likely that Neevan has begun to fall for him as well (“She knew she shouldn’t be thinking of him at all, much less thinking of his strange, blue eyes and thick, brown hair. She wondered if she would ever see him again”). This novel’s greatest strength lies in its refusal to demonize either side in the war. Although the Maggan people remain villains to the Karrans, Gehler allows us to see them as people who happen to be on the other side of the conflict for their own understandable reasons. This grants the depiction of the clash a complexity beyond epic fantasy’s propensity for pitting an army of heroes against an irredeemably evil horde. But at the same time, this particular hero’s journey holds few real surprises. The story generally meanders from one workmanlike battle to the next, each competently written but also overly familiar to genre readers, with few if any authentic twists or subversions. Clarian also proves to be a rather bland Chosen One. It’s never really clear what makes him so special, other than the word of the oracle.

Although well written, this tale about a Chosen One lacks genuine sparks of invention.

THE SEERESS OF KELL
by David Eddings
Fiction

THE SWORD IN THE STONE
by T.H. White
Newsletter sign-up