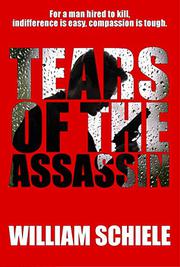 TEARS OF THE ASSASSIN

The evolution of a restless serviceman-turned-contract-killer takes some unexpected twists and turns in this debut thriller.

Anatomy professor Schiele’s vigorous debut novel follows David Diegert, a part-Caucasian, part-Native American 20-something Minnesotan frustrated with his dead-end mini-mart job and being stuck in his parents’ abusive home. A layoff motivates Diegert to take control of his own future by enlisting in the U.S. Army and he’s soon deployed to Afghanistan. Immediately upon arrival, he’s thrust into a covert heroin-smuggling operation; his short-temperedness abruptly ends his military career but also toughens his determination. A stint as a bar bouncer further solidifies his brassy personality, which gets noticed by the Russian gang members running the place; they quickly recruit him for special, violent assignments. The gig is lucrative enough to alleviate his financial woes, but it also becomes a gateway into a big-league criminal career as a hired assassin. From here, Schiele’s tour de force fully embraces its central character’s almost primordial transformation into a relentless killing-machine-for-hire—who also has a soft spot for beautiful women. The James Bond-like portrayal of Diegert is thrilling as he becomes an increasingly deadly force, carrying out intricate and lethal assignments from Austin, Texas, to Paris to Somalia to Greece; later, he gets involved in a hostage rescue mission in Romania. Diegert’s hubris becomes his undoing, though, when he becomes enmeshed in the corporate-espionage intrigue. This novel’s protagonist is a brazen hit man who becomes more murderous with each assignment, and as a result, the story is undeniably fast-paced and gripping. Readers may or may not root for Diegert as he becomes more threatening and volatile, but he’s inarguably a force to be reckoned with—Schiele empowers his daredevil character with unbridled physical agility—and his character acts as a solid anchor for the plot, up to its shocking conclusion.

A whirlwind debut, packed with excitement, espionage, and an increasingly dangerous main character who never lets up.