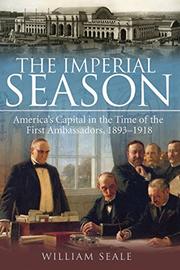 White House History editor Seale (The Garden Club of America's One Hundred Years of a Growing Legacy, 2013, etc.) takes the reader on a tour through the nation's corridors of power during the decades when Washington, D.C., emerged as a truly world capital.

The author has written extensively about the White House and many other historical American buildings. Here, he weaves together separate narrative threads about international affairs, diplomatic and political history, culture, architecture and city building. His starting point is April 11, 1893, the day that British ambassador Sir Julian Pauncefote presented his credentials to President Grover Cleveland. The upgrade from minister plenipotentiary to ambassador meant the U.S. president would henceforth be recognized as a head of state like others. “Quietly, symbolically,” writes Seale, “the White House ceremony marked the beginning of a new age for the mighty North American democracy.” The author traces the changes that flowed from such a development, while introducing the people who made it all possible. The U.S. moved to assert its new position and prepared to establish its global power in partnership and competition with the U.K. and against the Spanish. Men like Alvey Adee, a long-serving official in the State Department, John Hay, Lincoln's former private secretary, and historian and journalist Henry Adams formed a circle of friendship, which helped the change. Meanwhile, the nation's architects believed America's new global position merited the reassessment of questions of the design of the capitol building and the kinds of architectural themes that would dominate public building. Officials dusted off Pierre Charles L'Enfant's original designs and had marble from Vermont and elsewhere shipped into the capital to build Union Station, the Smithsonian Institution and many other iconic structures. The capital's social life and fashions were transformed accordingly.

THE SUMMIT
by Ed Conway
Nonfiction