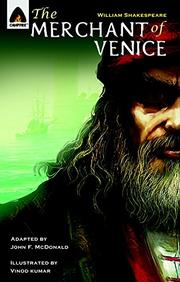 THE MERCHANT OF VENICE

A graphic-novel treatment of Shakespeare that fails miserably where others have succeeded. In this brutally savaged graphic adaptation of the play, the Bard’s lines have been transformed into conversational banality (“How is it going, Shylock?”; "That goes for me too!") within often-misplaced dialogue balloons. Astonishingly, there’s nary a mention of Jews, leaching all the power from Shylock's "Has not a Jew..." speech ("And why has [Antonio] done this? Do I not have eyes like everyone else..."). Actually, just about all of the set speeches are nearly unrecognizable: "The quality of mercy is not strained" becomes “You don’t need to have a reason to show mercy.” Visually, the floridly dressed Venetian figures in Kumar’s showy illustrations just stand about in panel after panel, gesturing awkwardly and looking past one another’s shoulders. Portia’s taste for revealing, off-the-shoulder gowns may give adolescent gawkers pause, but as an invitation to read the original or see it performed here’s sure proof that all that glisters is not gold. A closing set of riddles is offered as an activity link to Portia’s three boxes in the play. Skip. (Graphic adaptation. 12-14)