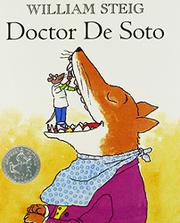 In this captivating story of a mouse dentist, Steig sets his stage according to the ludicrous logic of size discrepancy that intrigues children: to treat large animals (such as the pig shown), Dr. De Sore stands on a ladder; and for extra-large animals (a donkey is pictured), he is hoisted up on a pulley contraption by his wife/assistant. Then he gets right into his patients' mouths, "wearing rubbers to keep his feet dry." Understandably, Dr. De Soto refuses to treat animals dangerous to mice—not even "the most timid-looking cat." But one day when a well-dressed fox comes pleading with him to ease his pain, the De Sotos relent. And as the dentist works inside the fox's mouth, the patient goes from a lip-smacking dream under gas ("How I love them raw, with just a pinch of salt, and a dry white wine"). . . to wondering, after the first visit, "if it would be shabby of him to eat the De Sotos when the job was done" . . . to "I really shouldn't eat them. On the other hand, how can I resist?". . . to "definitely" making up his mind to eat them. But the De Sores, though compassionate, are no fools, and so they outfox the fox—coating his teeth with a final preventive treatment that is really glue. And so, with his jaw stuck shut (for just a day or two, the dentist assures him), the defeated fox stumbles down the stairs—which Steig, as a parting reference to the arrangements set forth at the beginning, has divided into the regular flight the fox is using and a narrower one of smaller steps. Simple but sly, a mischievously imaginative rendition of the classic theme.