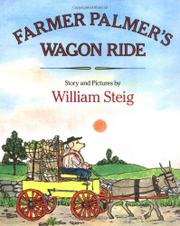 As overalled, suspendered Farmer Palmer is a pig, there's no reason why the ass he hitches to his wagon shouldn't be introduced as Ebenezer, his "hired hand," or why the two shouldn't chat on their way to market — except perhaps that Farmer Palmer is clothed in the picture-book convention of human animals and the ass isn't. Still Ebenezer's status as an employee does make his function as a beast of burden a little disconcerting, so that the mishaps that occur on the way home come as something of a relief. First, "Thunder rumbled and rambled" and "dramberamberoomed and bomBOMBED!" and a lightning-struck tree falls on the wagon. ("No one will ever believe this," says Ebenezer as he sets up tripod and camera for a photo of the pig chopping his way out with an ax.) Then Ebenezer sprains his hock so that Farmer Palmer has to hitch himself up and pull, and after a "bib-bibbidy-rib-ribbidy-rip" of a flying wheel, the farmer pedals the hired hand home on an overstrained bicycle built for one. Steig's unflappably matter-of-fact tone goes false only once (as the tree descends on pig and ass, "both realized they would rather not die at that particular time"), and though this lacks the expansive warmth of his previous picture books, the cumbersome maneuvers of this ludicrous duo bring some mild, mock-rustic diversion to the artist's usual bracing, sunny countryside.