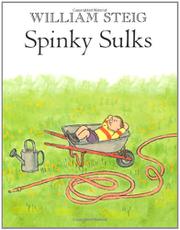 Spinky has such an exaggerated case of the sulks that the most confirmed pouter (unless similarly engaged at the moment) will see its humor, even while empathizing with Spinky's stubbornness. Nothing his family does mollifies him—not his mother's kisses, not his brother's apology ("You were posilutely right! . . .Philadelphia is the capital of Belgium"), not his father's sensible ignoring of him, not even a circus parade. His life ruined, he hunkers down in a hammock for a couple of days while everyone tries to cheer him up—until, in the fullness of time, he comes around on his own generous terms. Steig recounts this bit of realia with a splendid array of vivid words, comfortably arranged in colloquial cadences; his illustrations amplify the deft characterizations and nuances with warmth and impeccable design.