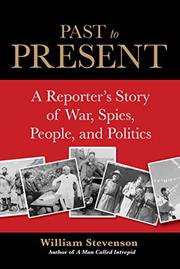 A Reporter's Story of War, Spies, People, and Politics

Born to a French mother and a father involved in secretive “special operations” during the war years, Stevenson (A Man Called Intrepid: The Incredible WWII Narrative of the Hero Whose Spy Network and Secret Diplomacy Changed the Course of History, 2009, etc.) grew up in East London dreaming about faraway places. At age 16, during the London Blitz, he volunteered at the British Navy office and gradually made his way through stages of assessment as a pilot; he recounts his adventures and poignant loss of buddies in short, punchy chapters. “Help me justify being alive,” he swore to the memory of lost comrades, and he decided to devote his life to the romantic idealism of his boyhood. In peacetime London, he got a job with Mercury News under Ian Fleming, who first informed him of an infamous man who shared his name, but with a different spelling: William Stephenson, who was well-known in British spy circles, and whom the author would later come to write about in A Man Called Intrepid. Stevenson relocated to Canada to work for the Toronto Star under the leadership of the enigmatic Harold Comfort Hindmarsh, or HCH, from whom he solicited approval for stories by submitting brief notes in his pigeonhole. The author was sent all over the world to cover exciting history-making moments (“HCH: Might it be worth confronting the killer of Leonid Trotsky in Mexico?”), and he records such encounters with Jawaharlal Nehru, Zhou Enlai, Mao Zedong, the young Dalai Lama, Ho Chi Minh (who impressed him mightily), Khrushchev and many others during his travels and documentary-making into Southeast Asia and Africa from the 1950s onward.