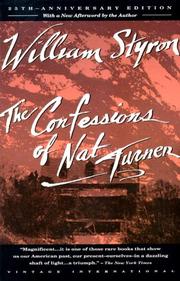 THE CONFESSIONS OF NAT TURNER

Few first novels promised so much for a new writer as Styron's Faulknerian Lie Down in Darkness; with only one flawed major book in between, now sixteen years later it is difficult to relate this to the early book except for the emotional charge of some of the writing, most effective when descriptive. In the fulminating first person of Nat Turner, Just before he is to be killed, this reviews at black heat the "ruction" he incited—a mass murder and rape in the Virginia of 1831. "Nigger preacher," self-designated prophet, Nat is primarily a man who for the last half of his thirty-one years has nursed a "pure and obdurate" hatred for white men (and a less pure desire for their women). In the language of the law he's just an "animate chattel" although he had acquired the "lineaments not just of literacy out of knowledge" through one master who had educated him to be emancipated, then sold him because of economic pressures. On the one hand Nat thinks many bitter, contemporary thoughts about the Negro's imputed intellectual, spiritual and biological (but not sexual) inferiority; on the other hand, the novel is full of Yassuh-Massa survival stereotypes and situations from a much older literature (i.e. memories of his mother submitting to the white overseer; of blonde Miss Emmaline sullied and "ravished" by her cousin, etc.). This makes the book uneasy to reconcile—whether as a polemic or a novel; and then again there is no congruence between the Nat Turner who lived and died before the Civil War and the Nat Turner who seems to be a superimposition of the '60's, resurrected in some flagrantly modern scenes.