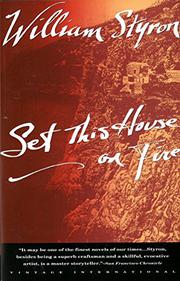 SET THIS HOUSE ON FIRE

The third and long-awaited novel by the author of the critically celebrated Lie Down in Darkness, this is a complex, ambitious book which sets out to explore the limits and varieties of good and evil and in the process presents a picture of recent American life which is drawn in compelling detail and with strong authority. A vigorous, alive book, in spite of its exhibitionism and shock, is totally unlike the author's first book in its quality of nihilism and a certain stoicism. The story is told from the points of view of two characters: Peter Leverett, a young New York lawyer who has felt vaguely responsible for the violent death of his wealthy friend, Mason Flagg, years before in Italy, and Cass Kinsolving, an American alcoholic painter who was mysteriously involved with Flagg. From the vantage point of the present, the two men reconstruct, together, the events which led to the rape and murder of an Italian peasant girl with whom Cass was in love and the supposed suicide but actual murder of the self-indulgent and egotistical Mason Flagg. If, essentially, William Styron demonstrates only the impossible complexities of the problem of evil, of guilt and retribution, he does succeed brilliantly in the creation of character and in a series of tableaux he manages to present absolutely devastating portraits of a special kind of American in Europe, of segments of a lingering Southern culture, the cultural avant-grade in New York and the particular, peculiar characteristics of the purveyors of mass culture and entertainment. Too sensational for many, this will be widely read and much discussed.