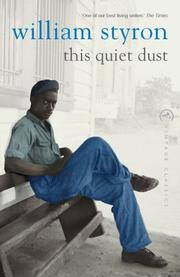 A generous but only sporadically impressive sampling from the noted novelist's occasional non-fiction over the past 20 years: book reviews, magazine articles, eulogies, commencement addresses, and other speeches. Styron's fiction following will be most interested, of course, in his reflections on the genesis of Lie Down in Darkness and Confessions of Nat Turner—along with an introduction that (echoing a few autobiographical pages in Sophie's Choice) bristles over some critics' historical/moral objections to Nat Turner. (In a James Jones eulogy, too, Styron lashes out at critics—"book-review hacks from Kansas City, lustful uptown votaries of Lionel Trilling.") There are brief tributes to Bennett Cerf, Philip Rahv, and Robert Penn Warren, longer ones to Fitzgerald ("the splendid equanimity, the compassion and humor, the love" in his letters) and to Thomas Wolfe—for his influence on a generation of writers, for his "clear glimpses . . . of man as a strange, suffering animal alone beneath the blazing and indifferent stars." Less persuasive are Styron's meditations on the Holocaust (which seem strangely obsessive in their emphasis on the not-just-Jewish nature of German war crimes), his reportage from 1968 Chicago, his quasi-defense of Norman Mailer re the Jack Abbott affair. (Styron, after writing an anti-death-penalty piece for Esquire—reprinted here—became involved in a somewhat similar embarrassment.) And along with sturdily balanced views of military matters in reviews of books on MacArthur and Vietnam, there are a couple of less predictable entries: a Nile travel-piece (brooding over tourism) and a 1961 paean to a camp-cult bio of Errol Flynn's last mistress. Very little that's fully developed or strongly involving, then—but, with a few autobiographical tidbits too (including a charming item about not winning a Rhodes scholarship), this potpourri will only be mildly disappointing for those who admire Styron's tough/sentimental/righteous blend of viewpoints.