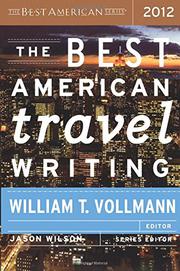 The latest intriguing batch of travel writing from the venerable series.

With series editor Wilson, National Book Award winner Vollman (Imperial, 2009, etc.) pulls together a wide range of pieces, including Monte Reel's look at how to explore the world like a Victorian gentleman and Elliott D. Woods’ essay on the zabaleen, or garbage pickers, in the Garbage City of Cairo. “There are real-life garbage kings in the village with informal businesses worth millions of dollars,” writes Woods, “but most of the 60,000 in the Garbage City live modest lives defined by hard labor and strong family obligations.” Indeed, many of the pieces will not make readers hurry to follow the narrator's footsteps—e.g., Henry Shukman's visit to Chernobyl, where a strange lushness permeates the region, or J. Malcolm Garcia's haunting and brutal piece on a murder where everyone knows what happened, but no one is willing to talk for fear of reprisal. Other narratives may entice fellow travelers, however—e.g., Paul Theroux's short piece on the Maine coast and, for those with a religious bent, Kimberly Meyer's essay on the elaborate Passion play performed each year in the Holy City of the Wichitas. From crossing the border in Tijuana in search of the Tijuana Sports Hall of Fame, to walking the border fence between the United States and Mexico, these stories, from such publications as National Geographic, Outside, Esquire and the Atlantic, undoubtedly bring a taste of adventure to readers. Though not filled with glamor and glitz, they open a window onto the strange, seedy and beautiful in the world, offering readers glimpses into places that many will never see or experience except through the eyes and words of these writers.