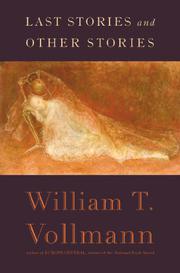 LAST STORIES AND OTHER STORIES

Vollmann (The Book of Dolores, 2013, etc.) turns his considerable intelligence and skill to a broad genre that doesn’t get much respect—namely, the ghost story.

Not all the pieces in this collection are ghost stories as such, mind you; not everything here goes bump in the night. But the very title is suggestive of Vollmann’s intent: These are not his last stories, or so we hope, but instead the last stories of men and women who are soon to become dust. Vollmann’s omniscient narrator instructs us, early on, in what to expect, intoning, “[t]o the extent that the dead live on, the living must resemble them,” and adding, to the list of axioms, the observation, “[c]onfessing such resemblance, we should not reject the possibility that we might at this very moment be dead.” In the first story, a blameless young couple, newly married, find themselves mowed down by sniper fire in a grassy lot in Sarajevo. Says that narrator, having darkly admired the skill of the gunner and raised a speculation or two about the events, “everyone agrees that the corpses of the two lovers lay rotting for days, because nobody dared to approach them.” The two hapless Bosnians needed La Llorona, the ghost of Mexican folklore, to warn them away from dangerous places; she turns up in another story, in which Vollmann ingeniously retells her legend, noting her bad habit of stealing away innocent children: “So La Llorona kept little Manuel, who was quite fetching except for the fact that his face resembled a death’s-head.” Small wonder those calaveras are so prevalent south of the border. After traveling the world, Vollmann brings us to an America in which death has definitely not taken a holiday: A dying man, having seen much of death before, finally gets to have a conversation with the love he’d lost track of ages before; that closing story is long, pensive and, like the others here, utterly haunting.

Exquisite: beautifully, perfectly imagined and written. Weird, too. A little heavy for the beach, perhaps, but perfect reading for the Day of the Dead.