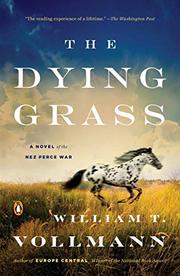 The indefatigable, seemingly inexhaustible Vollmann (Last Stories and Other Stories, 2014, etc.) returns with another impossibly long—and peerless—book, this one an epic study of the Nez Percé War of 1877.

That war is largely forgotten today, and though Chief Joseph is among the iconic Native American leaders of the 19th century, not many people could tell you why, notwithstanding Robert Penn Warren’s elegant narrative poem about him. Vollmann restores that history with an onrushing immediacy that takes on all the contours of a good Greek tragedy, complete with hubris born of supposed military superiority and an avenging angel taking wings in the form of the flight of an arrow. Vollmann’s central character, though not always at the center of events, is the American general Oliver Otis Howard, who pursues his prey, Chief Joseph, with the studied strategy of a game of chess (“Is Staunton’s chess chronicle still of use to you?” “Sure is, sir. It’s not a bit outdated.”)—a good ploy if you’re at a chessboard, perhaps less so if you’re on a field of battle with an opponent who doesn’t play the game. Howard is self-deprecating and cautious, quick to accept responsibility for failures in the field. Less so are his subordinates, including one Lt. Thellen, who falls at the battle of White Bird Canyon, the highest-ranking casualty there; Vollmann provides him with a compelling back story that includes a close association with a fellow officer: “I have imagined,” he writes in one of several appendixes, “without knowing for a fact, that they were close friends.” If not every moment of the narrative can be backed by historical documentation, Vollmann’s vivid reconstruction is believable and achingly beautiful, as often rendered in a kind of poetry as in ordinary prose: “he spies out the dark-tipped wings of the otherwise white snow goose, / the black beak and white breast of the long-billed curlew / but no brothers or enemies.”

Telegraphic and episodic—so much so that it recalls the later work of Eduardo Galeano—Vollmann’s saga is a note-perfect incantation. Stunning.