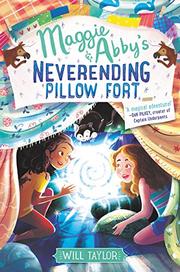 A pillow fort softens the growing pains between besties Maggie and Abby.

Maggie builds a fort while waiting for her “co-secret agent” to return from Camp Cantaloupe, eager to engage in epic imaginary adventures. Once home, Abby builds a matching fort, but she’s ready for real-world games with a wider circle of friends. They seem to be at an impasse until they have a breakthrough—literally, from one fort to the other via a fantastical pillow-fort link. More thrilling, they discover they can travel further afield, such as to Maggie’s uncle Joe in a remote Alaska cabin. It turns out they’re breaking all kinds of rules as per the executive council of the secretive North American Founding and Allied Forts Alliance. The friends each get what they want and then some: NAFAFA intrigue, a worldwide network of magical pillow forts, a centuries-old mystery, and a dose of life-and-death drama. Physical and cultural descriptions of the varied cast are brief, but personalities are vivid and colorful; narrator Maggie appears to be white, while Abby is Latina. Deeper themes of friendship, illness, bravery, and faith are introduced, but debut author Taylor maintains a light touch. Maggie never holds back, giving full vent to her gloriously intrusive imagination, self-doubts, sensitivities, and growing self-awareness. Some of the details are murky, but in a cliffhanger ending, the linchpin to the network seems to be Camp Cantaloupe, and Maggie and Abby hold the key….

Ridiculously irresistible, this will leave readers eager for the next escapade.