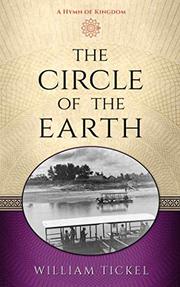 THE CIRCLE OF THE EARTH

Tickel’s haunting novel, the third installment of his Hymns of Kingdom series, is set in 1915 southern Texas during the time of the Mexican Revolution.

Thomas Asher is a complex man. He is a Texas Ranger past his prime. An injury has left him in constant pain and addicted to laudanum, the narcotic of the day. It relieves his discomfort and eases a mind still struggling with past hurt and grievances. His new assignment, requiring several days on horseback, will challenge him physically and emotionally. The Mexican Revolution has made the Rangers edgy, worried that the fighting will cross the Rio Grande into a state where the white population is a distinct minority. When a petroleum geologist spots Emilio Sanchez, a Mexican, in the desert with a horse and pack mule and casually mentions it to a deputy sheriff at his boardinghouse, he catches the lawman’s interest. That interest leads him to embellish the tale a bit, “unaware, for now, that his desire to impress a man he does not like will result in the death of a man he does not know.” The story makes its way up the chain to Capt. Render Moates of Ranger Company D in Laredo. Moates’ fateful decision to send his Rangers to track down a “contingent of Mexicans” will result in the reckless accidental shooting of Sanchez. Asher makes a life-changing decision and volunteers to stay behind to watch over the slowly dying man. Tickel has added a cosmic overlay to a basic morality play, but his linguistic skills and ability to tell a solid earthbound story should engage even the least spiritually oriented readers. When Asher begins to share his desperately needed laudanum with Sanchez, he transitions from has-been to prime mover in the battle to get justice for Sanchez. Among the cast of secondary characters, several of whom will have to face their own crises of conscience over the debacle, the most important is Beulah, Asher’s wife. Tickel unwinds the backstory of her days as a prostitute with tenderness and a not-so-gentle swipe at society’s hypocrisy.

A beautifully composed, tragic narrative with relevance to today’s morass of chaos and bigotry.