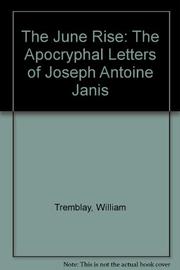 A messy, overwritten epistolary account of how the West was lost. Joseph Antoine Janis's father was a beaver trapper who took him to Colorado in 1840 and left him to live with the Arapaho, Cheyenne, and Oglala Indians to serve as liaison between them and the arriving white settlers. In these letters that Tremblay (Duhamel: Ideas of Order in Little Canada, not reviewed) imagines Janis might have written, Janis describes his life's work in a vague, roundabout way. He tells of leaving his home in Missouri, and his mother, who had hoped he would become a priest, and learning to survive in the wilderness with his father. He married a Lakota named First Elk Woman, and with her tried to save his father's West—rugged, violent, and pristine. Unlike his bigamist father who had married Janis's mother and a Cheyenne woman, Janis was faithful to First Elk Woman; their marriage was filled with love and mutual respect. Janis tried to reconcile the various aspects of his existence. He dreamed of creating a settlement where ``squawmen'' like him—men who were married to Indian women—and their families could practice the best both white and Indian culture had to offer. But when the US government forced him to choose between remaining on his homestead without First Elk Woman or joining her people on the reservation, Janis chose to stay with his wife; after much tragedy, including the death of three of his children, Janis couldn't fight any longer. Tremblay succeeds in painting a picture of the pre- settled West as brutal and hazardous, where human life meant very little and personal property even less. Where he fails is in fully explaining Janis's desire to preserve that culture. Janis, in fact, remains a frustrating enigma throughout the book. A good concept, but Tremblay captures neither Janis's voice nor his spirit.