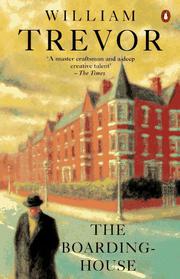 A startling import from England, this multi-pronged fancy concerning the fates of lonely middle-aged waifs in a London boarding house tunes the irony so fine, that both high humor and insidious horror are achieved seemingly without effort. The intent of the recently deceased Mr. Bird, owner of the boarding house, appears evident in the pages of his diary, where he has cooed his delight over his fastidious collecting of lonely souls to nurture and "educate" — poor, very tall Mr. Scribbin, absorbed in his gramophone; sad Miss Cave, wrapped up in her dead mother; charmingly fragile Miss Clerricot wishing just once for an amorous adventure; the miserable Venables, always in flight; the unrequited Nigerian lover, Mr. Obd; outspoken, sexually distraught Major; Studdy, a minor thief of infinite variety; and formidable Nurse Clock, smarting from an ancient insult. However, Mr. Bird's interests are revealed further, as by his will; Studdy and Nurse Clock, who roundly hate one another, are named co-owners to begin the work of destruction, and each inmate, cognizant of the hovering spirit of Bird, sinks further into folly and misery obviously from the residual of his unholy interest. It is Obd who frees the lot by flames. A wonderful clutch of originals, bizarre situations, delicately flowering evil. Chills, cheer.