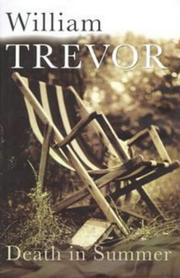 One of the masters of contemporary fiction, Trevor (After Rain, 1996, etc.) keeps his typically level head as he quietly records two worlds in collision. Though on the surface it portrays a conflict of class, this straightforward novel also captures with equanimity the delusional world of the downtrodden and the emotionally stunted lives of the genteel rich. Trevor’s tight-lipped Englishman, Thaddeus Davenant, comes into his wealth through his loveless marriage to Letitia Iveson, a spinsterish librarian who admires Thaddeus’s attachment to his decaying family estate, and who, at story’s outset, dies in a bicycle accident. She leaves behind a six-month-old baby, Georgina, who elicits from the usually distrustful Thaddeus a love and devotion such as he’s shown no female before. All his passion has been spent on the —tattered grandeur— of Quincunx House, the family estate preserved by Thaddeus’s Polish mother even after the family fortunes declined. And once Thaddeus reluctantly agrees to allow his mother-in-law (and former enemy) to join them at Quincunx, trouble begins—not with her, but with one of the rejected nannies interviewed beforehand, an orphan girl named Pettie, who quickly develops an elaborate fantasy life involving the grieving widower and his darling child. Becoming the Davenants— stalker, Pettie ignores her best friend Albert, a fellow ex-resident of the orphanage, who discourages her increasingly elaborate scheme. Himself guileless and slow-witted, Albert baby-sits an elderly woman and scrubs graffiti off the walls of the Underground at night, fearing anything that threatens his —orderly nature.— It’s this very quality in Albert that prevents one tragedy (involving the baby) even as he witnesses another. Trevor’s narrative balancing act comes to a brilliant finish when Albert’s shaggy-dog ramblings encounter the good manners of Thaddeus and Mrs. Iveson. Trevor suggests character with the ease of a single gesture or detail, and his narrative instincts are, as usual, dead-on, providing just enough melodramatic intrigue to propel his studies in interior life.