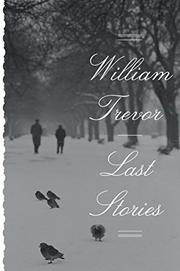 Ten short fictions from the late Irish master (1928-2016) explore love, betrayal, and the ways that people cope with life’s blows.

There’s a distinct shortage of happiness in this book, not least because it’s a reminder that Trevor (Selected Stories, 2010, etc.) is no longer writing. The stories themselves make up a grim group, dealing in theft, extortion, and infidelity. In the opener, “The Piano Teacher’s Pupil,” a boy’s musical talent comes with a light-fingered larceny. The teacher exemplifies Trevor’s uncanny skill in compression, defining the milestones of her life by one room and three sentences, noting how memory can ease pain: “If a beloved lover had belittled love it mattered less in that same soothing retrospect.” Theft arises again when a prostitute steals the savings of a man suffering from a memory disorder (“Giotto’s Angels”). “The Crippled Man” ends with a woman concealing her handicapped cousin’s death to keep his pension coming. Trevor paints the cousins’ lives in rich, sharp strokes while working in the marginal existence of two itinerant Carinthian house painters and the way a woman’s tough economies might benefit from a carnal arrangement with a butcher. In “At the Caffè Daria,” two women, once friends, meet years later after the death of the man who married one and then left her for the other. Another fickle male lover appears in “An Idyll in Winter,” barely touched by the pain he cavalierly inflicts on his wife and a former pupil. “Mrs Crasthorpe” is a widowed woman whose name partly defines her as crass, but while she dies in alcoholic squalor, sympathy is stirred by her trials with a son who is a recidivist flasher.