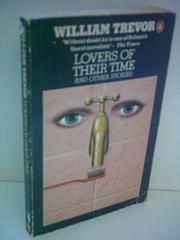 LOVERS OF THEIR TIME AND OTHER STORIES

What more can one say about Trevor? He is a master story teller of immaculate diction; he lays out initial scenes so cannily that you're clapped and sealed into an entire fictional world for the mesmerizing duration; and moreover, Trevor is uniquely sensitive to the moment of heartbreak—when what has seemed rich and secure in fancy or fact abruptly dissolves to reveal the vein of hurt or melancholy on which it fed. In these ten short stories, Trevor tests the reverberations of violence—wars, declared or de facto, atrocities to mind or body—that snake through time and distance to invade quiet lives. In "Matilda's England," the child Matilda hears crucial words from a fragile elderly WW I widow—"Cruelty was natural in war"—but doesn't understand their meaning till World War II kills off her adored father and brother; wounded by grief, she learns to wound, to isolate herself, ending up crabbed and alone in the long-dead widow's rapidly decaying mansion. In "Attracts," an aging schoolmistress, long ago orphaned by terrorism, ends her career in a tirade that pays tribute to a suicide in the Irish struggles; in "Torridge," public-school reunion revelers are joined by a legendary figure of fun from their past—and they learn that old cruelty can take root and flourish right up to the terrifying present. And the title story follows the bumbling affair of a clerk and salesgirl, an affair consummated in the palatial public bathtub of a splendid hotel—a Sixties' fantasy that became "miraculously real," now a sweet recollection in the sour and failed Seventies. These and other memorable portraits of good people tainted by hard times: the art of William Trevor, in an exemplary collection.