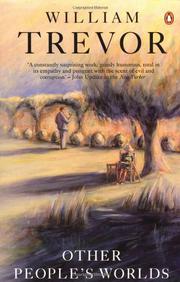 Another of Trevor's icy transparencies, here exposing the complex pathology of malignant attachments that result from the rogue drift of a somehow pitiable predator. He is handsome, appealing minor actor Francis Tyre—a 33-year-old thief, bigamist, blackmailer, and abandoner of aged parents who effortlessly and compulsively slips into new identities and situations. But Francis usually feels "let down," considering himself a victim—like Constance Kent, an abused Victorian murderess, subject of a TV play in which Francis once had a small role. His first wife victimized him, Francis feels: she was a 50-year-old dressmaker with a heart condition (and some money) who didn't die as fast as she promised to. He feels victimized also by gaunt, chain-smoking shopgirl Doris and their wretched blotchy-faced child Joy: because of the danger of a paternity suit, he has continued to see possessive Doris. And now there's a new betrayal for Francis to suffer from: 47-year-old widow Julia, whom he is about to marry in her beautiful home, makes a will in favor of her daughters—thanks to the urging of her mother, Mrs. Ansley, who feels a pinprick of unease about Francis and wonders "if she could tell from his walk what part he was playing." So, on the wedding night, Francis tells Julia about his grim, make-believe life-pattern (which began when he was seduced by his parents' boarder), collects her jewelry, and leaves her—implying that he forgives her for asking so much from him. And Julia, shocked out of love and faith, is then forced to enter the nightmare world of Doris—who, eaten with jealousy and ravaged by alcohol, will take a terrible journey to plead, to blame, and to murder; the once-religious Julia, finally "humiliated. . . with the truth," is compelled to take account of a world of savagery. True, the revelation of Francis' early homosexual experience seems a bit of a clinical contrivance. But that's the only even slightly false note here—as, again, with immaculate particulars, Trevor charts the metastasis of evil in a world of random tragedies and deliberate (if small) salvations.