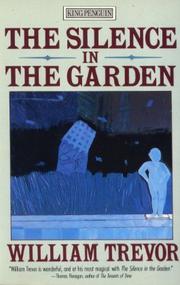 THE SILENCE IN THE GARDEN

How "the Troubles" of Anglo-Irish history affect life on one small island off the coast of county Cork is just one of the many quiet revelations in this thoroughly engaging, deceptively charming fiction by a modern master. Much of the narrative force here derives from the subtle design and the economical portraiture. Trevor wastes little time in suggesting that something dark and resonant with history will overwhelm the wide-eyed innocence displayed by Sarah Pollenfax when she first arrives at Carriglas, the "green rock" of an island lorded over for centuries by her distant relatives. The daughter of a penurious clergyman, Sarah enters a magical time at Carriglas as governess to her cousins, the children of the widowed Colonel Rolleston, an Anglo-Irish aristocrat who, with his mother's help, oversees the family estate. But this is all before WW I—which claims the Colonel—and before the Republic of Ireland—which ends years of Protestant privilege. When Sarah returns (at the aged Mrs. Rolleston's invitation) to Carriglas in 1931, she begins to discover how many of the more recent mysteries are rooted in that "idyll of a lazy summer" in 1904. To her horror, she learns that her cousins, along with her brother Hugh, once played a creel game with the son of a tenant farmer, and that, years later, the revolution provided cover for the Catholic boy's revenge—a bomb meant for the Rolleston children killed their butler Linchy instead. The cousins, forever penitent, enact their guilt with rituals of abasement and resignation—Villana marries a boorish barrister much older then she, and her brother John James takes up with a fat old Catholic widow. And Mrs. Rolleston, ever kind and generous, provides for young Tom, the illegitimate son of Linchy and the Catholic maid, Brigid. When the family extinguishes itself through self-punishment—none of them produces offspring—what's left of the estate passes to Tom, himself the bastard child of history. The rich array of life on the quay, and the comedy of aristocrats gone to seed, make this otherwise sorrowful story all the more affecting.