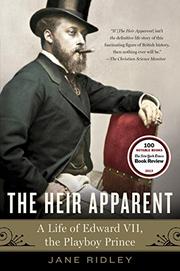 A highly readable, definitive biography of Queen Victoria’s son, the “black sheep of Buckingham Palace” who matured into an effective monarch.

Originally aiming at a short life of Edward VII (1841–1910), the eponymous British king who gave his name to an age, Ridley (History/Buckingham Univ.; Young Disraeli, 1804- 1846, 1995) unexpectedly received unrestricted access to Edward’s papers in the Royal Archives, a privilege not granted in 50 years. This proved irresistible; the author spent 10 years writing this top-notch life of the king. Edward’s mother, Queen Victoria, turns out to be not at all Victorian, but highly sexed, hysterical, as politically assertive as her grandfather and a terrible mother. Readers will flinch at the brutal educational regimen inflicted on her nine children, documented as if it were an affair of state. Unlike his siblings, Edward was not bright enough to absorb it or clever enough to sidestep the worst features. During a long, frustrating adulthood, he achieved some independence but never escaped the baleful influence of his mother. Until her death, when Edward was nearing 60, she persistently hectored him for his idle, irresponsible life while refusing to allow him any significant political duty on the grounds that he was idle and irresponsible. His playboy image was largely deserved during his youth, less so when he matured, both in years and in his treatment of women. Ridley emphasizes that not only did he become a wise and reforming king, but that his achievements have been underestimated through efforts of contemporary leaders, such as Arthur Balfour and H.H. Asquith, to suppress his contributions.

There is no shortage of biographies of Edward VII, but this thick, lucid and lively history deserves pride of place on the shelf.

THE LIFE OF ELIZABETH I
by Alison Weir
Nonfiction