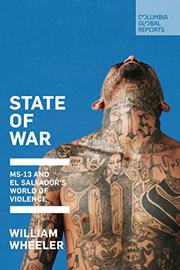 Journalist Wheeler combines a clear sense of geopolitical history and gutsy on-the-ground reporting, producing a compact tale of a slow-motion, violent societal collapse, termed by a political science professor he interviewed as “Somalization,” which is “defined by the fragmentation of power. Without the state. Here there’s no state.” The sad story has sharp relevance in regard to Donald Trump’s attacks on migrants and prior administrations’ treatment of the Central American “Triangle” as a political football, including Ronald Reagan’s stoking of a brutal anti-communist civil war. Others argue that the current crisis echoes a “culture of impunity fostered in the Cold War hysteria of the past, when the U.S. government was so focused on its enemies that it ignored the most shocking crimes of its allies.” Since the Salvadoran civil war wound down, cycles of corrupt, factionalized governments have alternately warred against and attempted collusion with two hyperviolent gangs—MS-13 and Barrio 18—both of which were essentially exported from Southern California during waves of deportations in the 1990s. Wheeler argues that this is best seen as a creeping extension of the civil war, with the gangs increasingly resembling guerrilla movements. He effectively penetrates the underworld, looking at how the gangs’ leaders learned to centralize power within prisons they controlled and how the gangs moved into both neighborhood extortion and transshipment deals with Mexican drug cartels. One MS-13 member Wheeler interviewed noted that “extortion had another hidden cost. It made the gangs parasites in their communities, exacerbating the cycle of residents informing and his clique murdering informants.” The author’s writing is colorful and clear, though a grisly hopelessness pervades his encounters—e.g., in the stories of devoted cops driven underground after participating in extrajudicial death squads or a freelance forensic examiner who believes the gangs will eventually kill him.

An urgent, digestible document of a violently failing state, with clear connection to flawed American policies past and present.