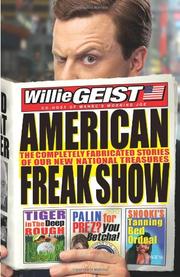 MSNBC veteran Geist (Morning Joe) graduated from producing that network's The Situation with Tucker Carlson to writing and eventually co-hosting the popular morning show. While his TV antics (campaigning for McCain-Palin on New York’s Upper West Side) might seem iconoclastic on-air, this low-brow, tepid collection of brief satiric essays leaves much to be desired. The book opens with a gig that was tired on SNL a year ago: the inaugural address of President Sarah Palin, delivered during an episode of World Wrestling Entertainment's Monday Night Raw. “The last time I checked, Ronald Reagan beat the Communists a long time ago. Oh, and get me an egg roll while you’re up,” and “You abort an unborn child, we abort you,” are two of her tasteless, if believable bons mots. But wait, it gets worse. Ever wanted to sit in on Tiger Woods’ sex-addiction group-therapy sessions? It’s here, complete with Wilt Chamberlain (really?), Charlie Sheen and God’s own Ted Haggard. Obama gets a visit from the ghosts of presidents past (“What was I talking about? Oh yeah, I ended the Cold War today. Game over,” from the aforementioned Gipper). Other selections include “Hillary’s Private Campaign E-mails,” between herself and her husband, which are even more tiresome than they sound: “Trying to remind everyone that he’s a black guy who loves blow. What else?” Hillary moans near the bitter end. The beatification of Oprah, a roast of Bernie Madoff in Hell and a Parenting magazine interview with Kate Gosselin ensue. A parody of the George Bush presidential library is a particularly easy target. Sprinkled with true stories that feel culled from Darwin Awards rejects, this compilation makes Al Franken’s parodies seem almost senatorial.

A mostly bipartisan satire that caters to the lowest common denominator on both sides.