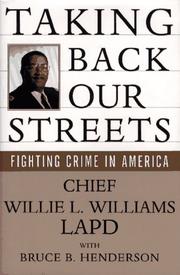 TAKING BACK OUR STREETS

by Willie L. Williams with Bruce B. Henderson

A surprisingly compassionate, common-sense guide to controlling crime, from the police chief of Los Angeles. Williams begins with the events of March 1991, when 81 seconds of videotape caught Rodney King being beaten by cops in L.A. Williams, then police commissioner in Philadelphia, privately congratulated himself on his own department, which was running better than it had in years. In June 1992, Williams moved across the country and took charge of the embattled LAPD, and inherited more trouble than he ever imagined. In this simple, straightforward book, Williams outlines the reasons behind the acrimonious relationship between Los Angelenos and their police. Williams, who is black (though he considers himself first and foremost ``blue''), addresses the issue of race by actively encouraging minorities to join the force and by reminding older cops either to accept new faces or leave. Williams is a staunch gun control advocate and a firm supporter of community policing, stands that have helped to decrease tensions in Los Angeles. He illustrates the importance of community policing through examples of arrests gone wrong, and he builds a strong case for streamlining procedures to identify and fire rogue cops. Williams may be quick to punish, but he is also quick to commend and finds much to praise about the LAPD, defending its actions in recent high-profile cases like the investigation of Michael Jackson for sexual misconduct. Williams's style lacks fire, but it is certainly heartfelt. While none of the ideas here are radically new, Williams presents his vision of a police department with enthusiasm and grace, and with the results to back it up.