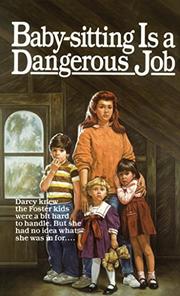 BABY-SITTING IS A DANGEROUS JOB

Don't toss off the title as a joke: true, narrator Darcy (rising ""thirteen and a half"") has her hands full sitting for the privileged, under-parented Foster young: Shana, two; Melissa, four; Jeremy, six. But this is about their kidnapping, Darcy in tow: a horror scenario that, for better or worse, isn't credible or scary. (No nightmares are in prospect--neither is edge-of-the-chair reading.) The very day that Darcy goes for her interview with ""Mrs./Dr. Foster"" (a psychiatrist, wouldn't you know), a black car tails her. Said black car is suspiciously around at other times too--but maybe just out of male interest in Darcy and boy crazyish friend Irene (the most natural thought here). Meanwhile Darcy is deciding, with some OK help from her mother, that the Foster children crave attention. And also meanwhile, classmate Diana Hazen, whose father beats her, has run away again: Darcy and Irene hide her, provisionally, in a tree house. Putting one and one together, it's the Hazens (father, brothers) who've been casing the Foster domicile, and who now abduct Darcy and the tots. The book's second, sluggish half has to do with Darcy's attempt to fool or foil the captors. There's an oafish brother who lets down his guard playing TV games with whiz-kid Jeremy; there are guard dogs with a weakness for little children. And, the ransom paid, all ends well and properly: the kids are in hiding, when the police arrive. At one point Darcy wisely doesn't open the Foster door for a suspect repairman; and the discussion of runaway Diana's legal/social welfare situation is instructive. But in general Roberts is out of her wholesome, whimsical element here. JLG.