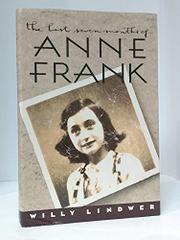 An enlightening, harrowing set of first-person narratives by six women who knew Anne Frank before the war and during her final hellish months in German extermination camps.

Lindwer, himself the child of Dutch-Jewish parents who survived the war in hiding, created a documentary film in 1988 featuring abbreviated versions of these interviews with survivors who grew up with—and nearly perished with—the single most compelling metaphor of the Nazi Holocaust. Even from a literary viewpoint, it is intriguing to hear from Hannah Pick-Goslar, who appears several times in The Diary of Anne Frank. She gives us her own perspectives on the precocious Anne and her family, and even recalls Anne receiving the beautiful diary as a 13th-birthday gift and constantly writing in it, "shielding it with her hand'' and never showing anyone what would become the world's most-read diary. This same girlhood friend throws a package of food and clothes over the barbed-wire fence to Anne, from another section of Bergen-Belsen, but another inmate catches and steals it. We also discover that a skeletal Anne succumbs to typhus and despair when she erroneously thinks that her father, too, has perished. Other large ironies and small details fill out a picture of what happened to the diarist after the Nazis discovered the "Annex'' on No. 263 Prinsengracht

Anne Frank would have been 63 this year; Lindwer's invaluable effort picks up where the diary of the century leaves off.