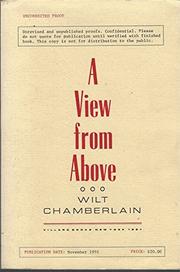 A VIEW FROM ABOVE

``When I play games I am so competitive that...I will take full advantage of any slip...to the point where many...kiddingly accuse me of cheating. How else are you going to accuse a seven- foot 300 pound man of cheating but kiddingly?'' Intimidating as ever, basketball great Chamberlain (Wilt, 1973, coauthored by David Shaw) reveals a lot more than probably intended in this wordy wit-and-wisdom collection. On the playing floor, Chamberlain was sensational—his arrival in pro basketball totally disrupted the established salary scale, after which he redesigned the game, popularized it, and set a pile of still- standing records. But at the writing table, he is, alas, opinionated, resentful, and unconcerned about continuity, organization, or consistency. (At one point he's a gourmet; later, his favorite food is white bread with peanut butter and mayonnaise.) Chamberlain is also concerned with his stature and sexuality (``few recognize the sensualness I have in this seven- foot frame'') to the point where his isolation, never really dealt with, is painful to consider (though he's not concerned ``to see [his] athletic prowess embodied in offspring''). And he just can't let others be great: Globetrotter Meadowlark Lemon is okay, but team-player centers like Celtic Bill Russell and L.A.'s Abdul Jabbar are limited pretenders. After some obligatory respect, Chamberlain gets to his point: ``There may never have been a star athlete used as a yardstick as much as I....'' (What about Babe Ruth, Pele, Joe Louis, Bobby Jones?) As for today's talent, ``centers now are making $2 million a year...if you pro-rated my salary for what I did...I'd be making $20 million.'' Like Muhammad Ali, Wilt was the greatest, but there's no lilt or wit to make his tale palatable. Ali knows it took Joe Frazier to make him immortal, but Wilt stands forever alone with those awesome records. (Thirty-two pages of b&w photographs—not seen.)