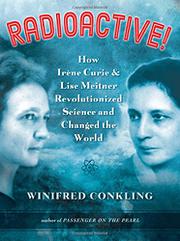 “Radioactivity was the first new property of matter discovered since Sir Isaac Newton defined the law of gravity in 1686,” and the work of Irène Curie and Lise Meitner in the early 20th century helped to open the door to modern physics.

Irène Curie was the firstborn child of the world’s “ ‘First Family’ of science.” Lise Meitner was the daughter of a Jewish lawyer in Vienna and a victim of Hitler’s anti-Semitic policies. Curie and Meitner, working independently, were research rivals, each seeking a name in the field of theoretical physics that was about to change the world. Conkling discusses the two scientists separately, Curie in the first several chapters, Meitner in the next several, and their stories come together in a final section when the race to create an atomic bomb was on. It’s an uneasy blend of biographies, though astute readers will see that it’s the science itself that links the stories, not a personal connection between Curie and Meitner. Readers interested in a more succinct and compelling look at Meitner’s work on fission than what’s presented here will find it in Steve Sheinkin’s Bomb (2012). Flat writing and too many pages of dense text unrelieved by photographs or other visuals mar a volume that might have been suspenseful.

An important if sometimes-awkward study of two scientists who helped to change the world.