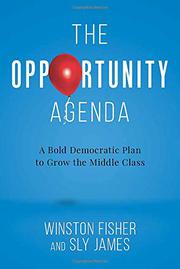 A Bold Democratic Plan To Grow the Middle Class

A political work offers a new vision for the Democratic Party centered on economic opportunities for the middle class.

“Had Democrats been successful in prioritizing and implementing” an economic agenda focused on middle-class Americans, Fisher and James contend, “the economic impact of COVID-19 would have been far less.” Fisher, a New York City real estate entrepreneur and co-chair of the governor’s Regional Economic Development Council, and James, the former mayor of Kansas City, Missouri, are not Donald Trump supporters, but they save their harshest critiques for their own party. Rather than developing a long-term plan to help middle-class Americans, today’s Democratic politicians too often lean on “the public’s revulsion to Trump” as the center of their electoral strategy. In place of the party’s vague, anti-Trump approach, the authors propose an “Opportunity Agenda” revolving around economic uplift for the middle class. Believing that Americans elected Trump out of “their frustration with a brain-dead government,” the authors contend that a new generation of “Opportunity Democrats” who prioritize the economic needs of the middle class has the potential to revitalize America. They note, for instance, that Crawfordsville, Indiana, a nearly all-White, blue-collar town that voted overwhelmingly for Trump, has a “glaring lack of affordable childcare.” Government-supported day care, paid family leave, and other policies geared toward working families would have an immediate economic impact on small towns like Crawfordsville. Other items listed in their innovative agenda include a “new paradigm” in public education that emphasizes skills-based training, infrastructure improvements, and portable benefits that provide a safety net in today’s gig economy. Though the authors’ ambitious and cogent ideas will appeal to independents and moderate Democrats, many liberals may be put off by the book’s use of phrases like “return on investment” and its embrace of businesses (one idea, for example, is corporate control over high school curriculums in order to produce skilled laborers that best serve industry needs). In addition, some Democrats and independents may be unhappy that the social injustices clearly highlighted by the Black Lives Matter movement—including systemic racism, police brutality, and mass incarceration—are left out of the authors’ plan.

This intriguing but limited Democratic agenda focuses on a pro-business economic platform.