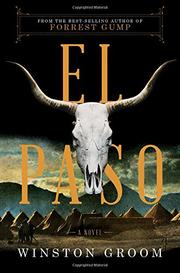 Up-by-the-bootstraps Irish immigrant–turned–railroad baron John “the Colonel” Shaughnessy learns his ranching operation in Chihuahua, Mexico, is being threatened by Pancho Villa and his rebels. The Colonel lives extravagantly, and so his adopted son, Arthur, works hard to keep the Shaughnessy railroad afloat, and they both know losing the ranch might mean bankruptcy. Unfortunately, the overconfident Colonel turns a mission to rescue the ranch into a Shaughnessy family expedition and misjudgment that ends with Shaughnessy wives and Arthur’s children being kidnapped by Villa’s rebels. Groom casts bit parts for Gen. Pershing and George Patton, John and Ethel Barrymore, socialist journalist John Reed, Tom Mix, and the legendary Ambrose Bierce, who rides with Villa and offers sardonic observations on the haphazard revolution. Groom cranks up tension with bloody raids, bullfights, a cattle drive, and Shaughnessy’s rugged Samoan bodyguard, Bomba, in a dangerous, separate, solitary pursuit. Groom’s historical knowledge makes it all real, especially with references to oddities like isolated Chihuahuan descendants of Marrano Jews who fled the Spanish Inquisition and tragic real-life figure Henry Flipper Jr., the first African-American West Point graduate, who joins Arthur’s rescue party. Arthur and the Colonel evolve into admirable characters. Those changes are beautifully portrayed, but Groom too quickly sketches an unsatisfying conclusion for the remade Shaughnessys. There are other gaps: there’s a Shaughnessy daughter who helps young Arthur assimilate but is later dismissed in one sentence; and also the story would be improved if more were heard from the Shaughnessy wives while they await ransom.

It’s not Lonesome Dove, but Groom’s Searcher’s-like rescue pursuit and his allusive homage to Treasure of the Sierra Madre make for an entertaining Western story.