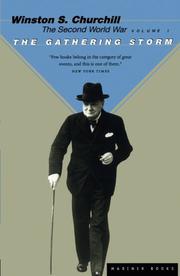 A tremendous book of which the digests made for Life and the necessarily cut excerpts in the New York Times gave no conception. For Winston Churchill shows himself as historian, biographer, dramatist, journalist; important as is the substance of what he records of the years leading up to war, more important for the reader is the color and vigor and originality and fearlessness of his manner of recording. Churchill, the man, comes through- as he does in his broadcasting — as he does on the platform- as he does in his printed speeches — but as he failed to do (for this reader at least) in the slashed copy which ran serially. He makes the years of so-called peace pregnant with meaning (and with frightening parallels today). He shows with almost rhythmic precision the points at which World War II might have been prevented. He proves that democracy unless welded into larger organizations lacks security. He brings constant evidence to indicate the dangers in the counsels of prudence. Britain and France consistently lost ground while Germany rearmed. British "fatuity and fecklessness" made the Manchurian incident, Abyssinia, the occupation of the Rhineland, the results of the Saar plebescite, the betrayal at Munich possible. And yet Churchill avoids direct attack on Chamberlain, simply saying that the fundamental bases of the differences lay between "sweet reasonableness and the mailed fist". By the time Britain was awake to inevitability of war, Germany was in her fourth year of preparation, Britain her first. It was a sad tale of wrong judgments by well-meaning people. Further errors of judgment are indicated in the disdaining of the Russian offer of collaboration, in turning aside Roosevelt's desire for an intergovernmental conference — until it was too late, and the march of time brought the fall of Austria, Poland, Norway, Holland, Belgium. During the "twilight war" period, after Poland, Churchill again played a part, and records his service as Lord of the Admiralty, his plans- stymied by delay until too late. Vivid pen portraits throughout add immeasurably to the whole.