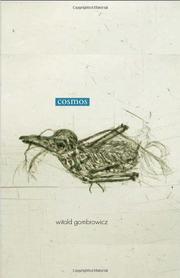 Like William Blake’s poetry, Gombrowicz’s darkly puckish novel, first published in Poland in 1965, strives to see the world in a mustard seed—and neither the attempt nor the results are pretty.

The narrator, casually identifying himself as Witold, is a student traveling through the Koscieliska region on vacation. Together with Fuks, another student, he finds a sparrow hanging from a tree in the woods outside the rooming house run by the Wojtys family. It’s obviously an omen, but the narrator’s preoccupation with its meaning is only the opening round in a series of ever more puzzling obsessions. He can’t help seeing an unspecified “relation” between the mouth of Katasia, the pension’s housekeeper, misshapen by a car accident but somehow erotic, and the more normal but inseparable mouth of Lena Wojtys, the daughter of the household. He’s fascinated by the wire mesh over an ashtray in the parlor. When Lena points out a crack in the dining room ceiling that looks like an arrow, he finds a remarkably similar arrow in the ceiling of the room he shares with Fuks. Other characters seem scarcely less obsessive. The master of the house constantly coins nonsense words he repeats more and more compulsively. Fuks’s only topic of conversation is his mistreatment by his boss Drozdowski, who never appears. When Lena’s cat is strangled and hanged like the sparrow, the narrator is as bewildered as everyone else. The answer—what answer there is—lies in the future, not the past. Long before the stunningly inconclusive fadeout, though, readers will have given up hope that these monstrous minutiae will ever yield the clear-cut meaning the narrator demands.

A contemporary of the French New Novelists, Gombrowicz (Bacacay, 2004, etc.) may well be the missing link between Nikolai Gogol and Nicholson Baker.