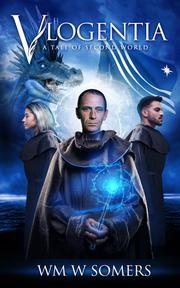 A Tale of Second World

In this fantasy novel, a king in an alternate universe plans to conquer an entire realm, and he kidnaps people from our Earth to do it.

Sixty-five million years ago, a comet crashed into Earth, resulting in mass extinction—and the opening of a gateway to a parallel universe. Later, in 1585, Father Sebastian Vlogentia Garcia Lopez leads residents of his village to a small island to hide from Spanish inquisitors. As they explore their new hiding place, Father Sebastian stumbles upon a glowing, floating orb, which transports him to an entirely new world. He soon realizes that he’s found a place that could be truly safe for his villagers. Years later, in the Second World’s kingdom of Vlogentia, founded by Father Sebastian, a woman named Bianca celebrates the new year by spending time with her boyfriend and taking part in a sport before an audience of thousands of spectators; then one of her teammates leads her to a group of kidnappers. Back on our Earth, Jason Blankenship and his wife, Margaret,are taking a trip to investigate a new job offer. Before long, they’re abducted, as well, taken to an island in the middle of nowhere, and sent through the portal to Vlogentia. Now Jason is being forced to help his kidnappers create a poison—which is just one step in the king’s plan to take over all of the Second World. Now Bianca, Jason, and Margaret must work together to escape their captors and foil the plot. Over the course of this fantasy novel, Somers offers an often engaging, if uneven, tale of two worlds coming together. The author appears to have done his research when it comes to aspects of Mayan and Mesoamerican culture and how they permeate the architecture and culture of Vlogentia, which is an impressively addition to the overall worldbuilding; he also includes several appendices regarding these elements at the back of the book. However, some of the dialogue leaves something to be desired; for example, Jason’s kidnapper often speaks like a bad movie villain, as when he advises his cohorts to “do your destructive best.”

An entertaining, if occasionally uneven, fantasy tale about a parallel Earth and the strange creatures therein.