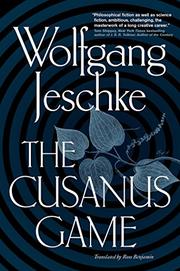 First novel to appear in English translation from Czech-born German writer/editor/publisher Jeschke since The Last Day of Creation (1984).

By 2052, economic and political meltdown threatens the entire planet. A nuclear disaster in Germany has rendered huge swathes of Northern Europe uninhabitable; vital plant species are becoming extinct. Nanotechnology may be creating more problems than it solves. A top-secret research program sponsored by the Vatican—now relocated to Salzburg—known as the Rinascita Project aims to preserve the future by exploiting the past. Time travel, it seems, may be possible using solitons, standing temporal waves that susceptible persons can ride from present to past and back; the kicker, though, is that multiple branching realities result. Botanist Domenica Ligrina, one of the Rinascita recruits, proves extraordinarily sensitive to the solitons, and what she fears are hallucinations may be an ability to sense other realities and other Domenicas. Her destination is the 15th century, where her task will be to gather specimens of the extinct plants. As she studies the period, she becomes fascinated with German philosopher, theologian, jurist and astronomer Nicolaus Cusanus. In the past, meanwhile, Nicolaus receives strange reports of a highly educated witch who claims to have seen the future. And what of the mysterious creature known as the angel? Is he the mathematical genius from the future who may, or did, or will, invent time travel? It’s impossible to summarize how Jeschke weaves both the theory and practice of time travel into rich, vivid overlapping narratives and characters that appear, collapse, reappear and metamorphose much as the alternate realities do. Sometimes, however, the narratives get bogged down in superfluous detail.

A remarkable and utterly convincing work whose construction mirrors and illustrates the concepts it so meticulously and logically develops out of respectable scientific ideas.